JA Advances to 6A Title Game 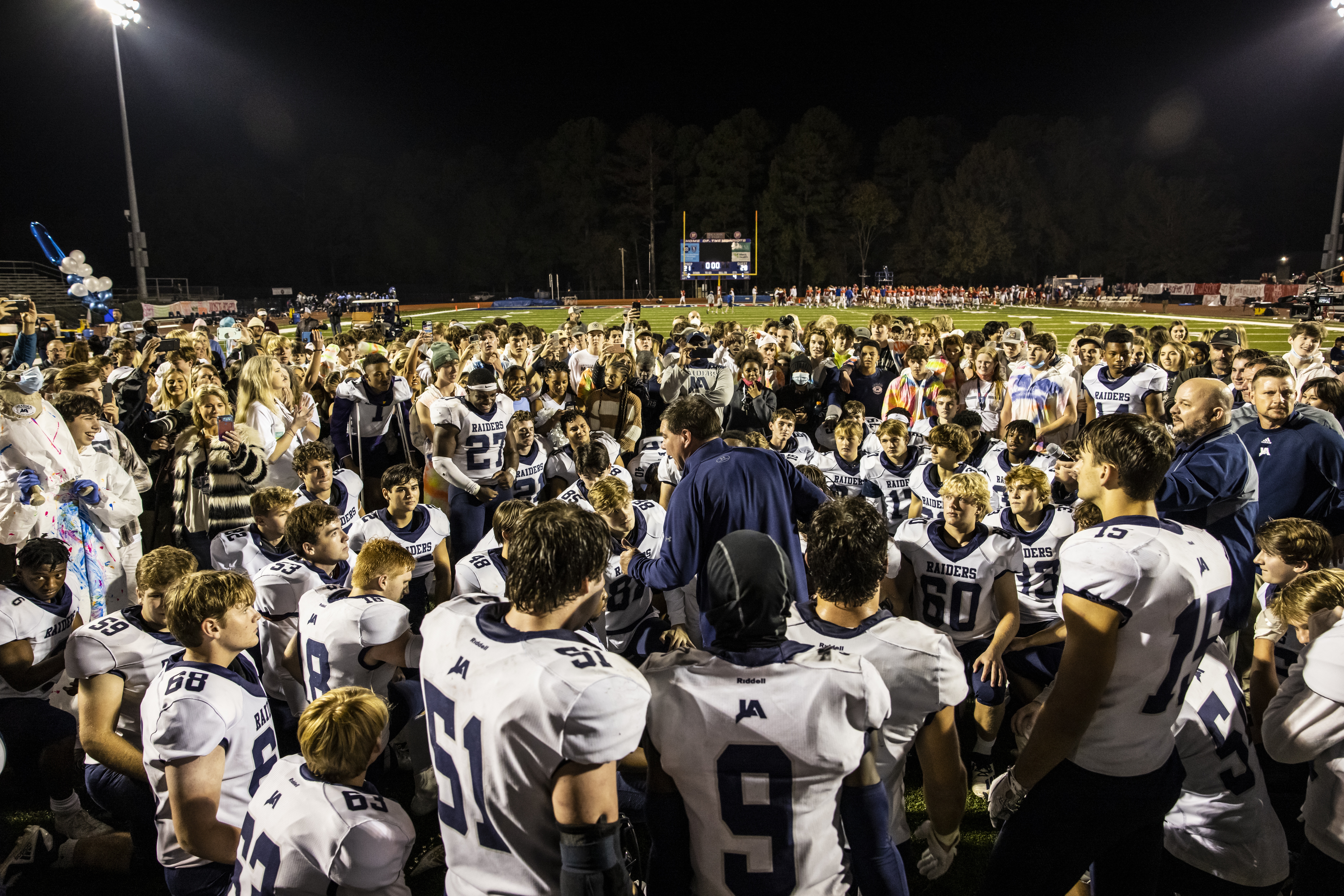 Jackson Academy traveled to Flowood to take on Jackson Prep for the fifty-fifth meeting between the two schools and the twentieth meeting in the playoffs. The Raiders were trying to halt a twelve game losing skid to the Patriots, and win their first game in Flowood since 2004.

The Raiders did not win the coin toss but they did go on defense as the Patriots elected to receive to start the game. The Raider defense marched on to the field and held the Pats to a three-and-out. The Raiders turned the ball over at midfield on a fumbled exchange and Prep capitalized by scoring 7 plays later on a Matt Jones TD run of 6 yards. JA answered that drive with a scoring drive of their own as they marched the ball down the field in 11 plays covering 80 yards and taking 4:25 off the clock as Dan Smith caught a fade route from Jackson Conn from 6 yards out for his 14th touchdown of the season. The Patriots answered that TD with another one of their own as Jones hauled in a 3 yard pass from Riley Maddox for a 14-7 lead that they would hold at halftime.

JA started the second half with possession but turned the ball over on downs near midfield and Prep converted it into a 21-7 lead as Maddox stretched the ball over the goal line for a 1 yard TD. The Raider defense was stellar from that moment on as they held Prep to a total of 45 yards for the rest of the game, forcing three punts and snagging two interceptions. Meanwhile on the offensive side, JA scored early in the fourth quarter on the a 40 yard touchdown catch by Lardarius Webb, Jr., his first of the season. Two drives later, JA fans watched Marcus Harris rumble for his longest run of the season, a game-tying 75 yard touchdown. Then late in the fourth quarter, Caleb Hernandez secured his second interception of the season which set up JA with a chance to win on a Field Goal. But the Raiders wound up getting an amazing 37 yard touchdown catch from Dan Smith. Merrit Nations knocked down a second and third down pass from Maddox and then Simms Baker batted down the final pass from Maddox as the Raiders took control with 8 seconds left to halt the twelve game losing skid to the Pats. Harris notched the 16th 100 yard game of his career. JA improved their record to 10-3 and punched their ticket to the MAIS 6A Championship Game.

Defensive leaders for the game for JA were Donovan Veasley as he led the team with 12 tackles (9 solo). Adams Kennedy tallied 9 tackles (3 Solo). Lardarius Webb Jr. finished with 8 tackles (8 solo), his first INT and a PBU.

The Raiders will battle MRA in The MAIS 6A Championship Game on Saturday at MS Veterans Memorial Stadium in Jackson. Pregame on The MAIS Championship Network will begin at 1:00pm, Kickoff will follow at 1:15pm