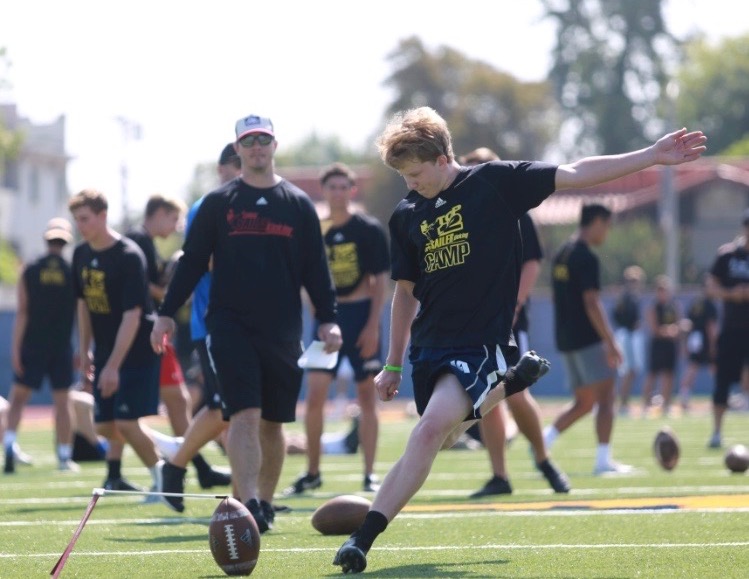 Rising senior kicker Land Gebhart has been busy this summer as he prepares for his final season as a JA Raider at The Brickyard. He was invited to the University of Georgia Kicking Camp to start off the summer. He performed very well in Athens, making it to the field goal and kickoff finals. He then went to Oxford and the Ole Miss Kicking Camp and also performed well.

He was invited to the Kicking Camp at Georgia Tech, and had a great time. He enjoyed a tour the first day, and camp on day two. He did very well on field goals and had the best results on kickoffs at camp.

Land had his best camp in Starkville at Mississippi State to cap off his College Kicking Camps. He went a perfect 8-for-8 on Field Goals and had very good results on kickoffs.

Land was then invited to the prestigious Chris Sailer Kicking "Top 12" Camp in Los Angeles. Only the top 45 kickers in the nation, with high school and JUCO kickers, are invited to this camp. He made it to the finals on two of the three days he was there. He made many field goals of 50+ yards, and even backed up all the way to a 60 yard field goal.

He is currently one of 48 Five Star Kickers (D1 Prospects) in the Country and has made it all the way up to 24th in the national rankings, of 500+ kickers. He also was named the Vegas XXXIII Class of 2020 Field Goal Champion earlier this year.